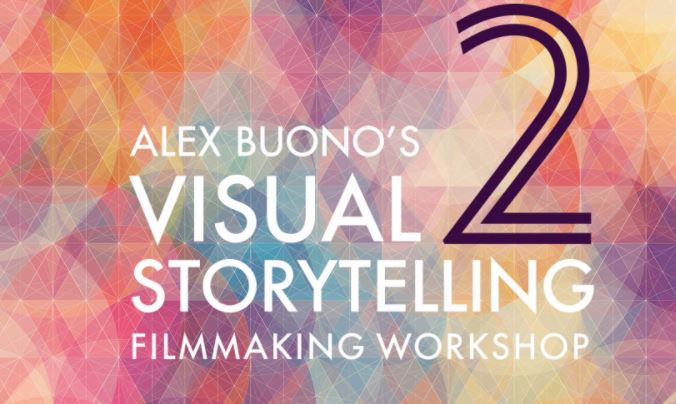 Please note: Videos 9 and 11 are missing.

Building on the curriculum of “The Art of Visual Storytelling”, Alex Buono deconstructs the architecture of visual style, and through live demonstration shows you how to recreate various genres and looks on almost any budget. In the second part of the course Alex gives a masterclass on Visual Subtext, explaining the “why” behind the “how”.

Drawing on his experience as the Director of Photography for the Saturday Night Live film unit for 17 years, Alex is able to instantly deconstruct and replicate almost any genre or visual style. His work as a Cinematographer and Producer have earned him an Academy Award nomination as well as multiple film festival awards.

Case Study: “SNL Title Sequence”
Alex opens the course with an overview of the complete syllabus, then dives straight into a case study on visual style using the SNL 40th anniversary title sequence.

Live Demo I: Custom Bokeh and Pixel Stick
In the first live demos of the course Alex takes us through two creative practical effects he used on the SNL 40th anniversary sequence – custom bokeh and the pixel stick – and shows how to execute the same effects.

Live Demo II: Free Lensing
Alex continues to showcase the in-camera effects that helped to create his memorable SNL intro, and in this module he guides us through an example of “free lensing” or “lens whacking” which gives a dreamy aesthetic to shots.

The Components of Visual Style
In this module Alex breaks down the components of visual style, and explains the strategy that he’s used on Saturday Night Live to faithfully recreate the exact look and feel of Hollywood blockbusters, Documentaries, Promos, Music Videos, Reality TV shows and many more, all within the shortest of timeframes.

Live Demo III: Firelight Scene
Alex continues his visual style deconstruction example from the previous module, in a firelight scene live demo that replicates a shot from “The Maze Runner”.

Live Demo IV: Mixed Color Temperatures
In this module Alex discusses one of his biggest challenges on-set: Mixed color temperatures. He gives his three strategies to combat this, along with live demonstrations to show you the exact steps to take to ensure your shots are evenly colored and gradeable.

Deconstructing Doc Style
Continuing the discussion on visual styles, Alex takes us through the different sub-genres within the popular ‘Doc style’, which has gained popularity in both narrative and factual filmmaking.

Live Demo V: Interviews
Continuing to deconstruct Documentary-style, Alex takes us through some live demos showing how to recreate each in an interview setting.

Live Demo VI: Driving Scene MISSING
In this module Alex walks us through four separate approaches to shooting a car spot, using the Lincoln Matthew McConaughey TVC and SNL’s Jim Carrey parody as an example. He then shows us some techniques that even Hollywood feature films use to shoot car scenes without requiring huge budgets.

Day Exteriors
Alex tackles one of the most difficult shots to shoot on a budget – the day exterior. Using the SNL sketch “New Day” as a case study he walks us through a complete breakdown of how he lit and shot it all in just one afternoon. Afterwards we look at how to create contrast and control lighting in day exterior shots, using Alex’s work on the SNL short “Swiftamine” as an example.

Live Demo VII: Music Videos MISSING
Continuing his examination of various film genres Alex tackles one of the most popular – the music video – and gives his four rules for shooting them. After breaking down the SNL short “Wishing Boot”, he takes us through a live demo shoot that provides a versatile approach for any music video. We finish the module by looking at high-key lighting examples, and a demonstration combining it with different flavors of filtration and diffusion.

Lens Selection
In this module Alex focuses on lens selection, and the differences between still and cinema glass. He breaks down his work on “Documentary Now” and how he achieved authentic looks by employing vintage lenses, and then gives a live comparison of a vintage lens next to a modern cinema lens.

Color Correction
With color correction being such an integral facet of filmmaking, Alex talks about it briefly in this module, sharing the precise correct order of events that he employs to ensure he gets the best results when correcting footage either on a solo project or when working with a colorist.

Alex’s Biggest Mistakes
Making mistakes is an essential part to learning one’s craft. In this module Alex opens up about his biggest on-set mistakes from dropping lenses, to under-exposing shots on his Academy-award nominated short film “Johnny Flynton”. He goes on to share his insights on how best to get hired for jobs.

Understanding Visual Subtext
The inflation of images in the modern world has caused a recession of meaning – we’ve been overexposed to the point where a picture is no longer “worth 1,000 words”. This has made visual subtext all the more important as filmmakers and artists look to add more depth to their creations. In this module Alex gives his three rules to visual subtext, explaining how to add subtext to your film to make it more universal through case studies including “The Silence of the Lambs”, “Guardians of the Galaxy”, “Gladiator” and more.

Getting started with Visual Subtext
In the final module of the course Alex looks at how to begin introducing visual subtext to your own works. He reviews the primary sources for subtext and gives examples of each, before concluding with an explanation of how he attempted to incorporate these techniques into his work on “Green Street Hooligans”.